The Mist (work in progress) 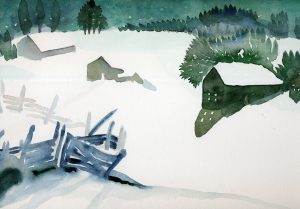 The old railway station lay in winter shadows. An icy gale was blowing from the lake opposite the platform. The woman slowly approaching was in her late sixties. She arrived on foot, carrying her suitcase in one hand and a guitar case on her back. She placed her luggage beside her and sat down on a seat by the platform. There was a worn label on the suitcase, written with a quirky and trembling handwriting, some of the ink was blurred, so her name could well be anything.

She was dressed in boots, and a velvet coat, with a wool shawl wrapped around her hair to warm her cheeks from the gales. She took a bite on an apple. Her cheeks were covered with tears, perhaps from the recent walk in hard wind. When you weep for long, there is always an unknown reason, triggering the tears, like a stroll in a storm.

Leaves of grass and dry poppy stems stood like spears by the railway and the platform. The station building was silent and black windowed.  No train had passed this station for ages. She was alone.

She was not exactly a bag lady, but close to that category of people who carry most of their belongings in cases. She found homes where she could find a job, but when there were no jobs she had to move on, she had to leave all she had found or been given behind.

There is so very little one can carry in a suitcase. But do you really need anything else? This railway station was abandoned and seemed safe. It would shelter her for a while. She was cold. Soon her journey had to go on.

A man was standing outside in the howling wind. It was as though he was covered in a mist, a traveller from the past. She hid behind the corner of the station, because she was not in the mood for talking to anyone. She felt safe, when she could see him without being seen.

The man standing in front of the station building was a man of some age, grey hair, worn clothes, old suitcase. He wore a very old fashioned coat which was floating in the strong wind behind him. A cape? His hair was blowing unruly in the wind, covering his face. He looked like a guard or a police detective from the 19th century.

He did not seem to notice her, or maybe he just took no notice of her.

He was photographing the station and held in his hand an old camera of the kind people used at the beginning of 2000, many years before.

A camera. Haven’t seen them for quite a while, she thought. I do not want company or to meet anybody I have to hold a conversation with, and I have no money. It’s embarrassing to meet people when you are broke.

She read the sign on the station building wall with some difficulty. Time had erased some of the letters’ edges. What was left seemed to be KV RNA-BO. The Mill’s what?

She translated the names of places automatically. She believed in a hidden significance behind names. (True, most names are tales of long gone times.)

The wind blew harder and took hold of her shawl. The shawl blew to his feet. She hid.

He took up the shawl, looked around him without seeing her and then he lifted the shawl onto his nose.  He felt the faint scent of it and then called out into the wind: “Whoever you are, do not throw your old shawl on me!”

He said something more, but the wind was blowing harder and took his words away. It was a vibrant voice. She walked towards him battling through the wind:

Then there was silence. Since the time of books had long gone, and all libraries and book shops had closed down, there had been no words to share, so language was reduced to the essential. Images had taken over and fingers did not write anymore. All people did was to swipe finger over images on so called pods.

He gave her the shawl and put his old camera into his pocket. Then he signalled for her to come with him and they sat down on the bench. He took out a wrapped and strange looking object from his bag. It was a thing she had not seen for long. It was an old and worn book. But this was not an ordinary printed book as she remembered them. He held the book with a gesture of tenderness between his hands.

She noticed that on his hands, he wore rings with signs she faintly recognized engraved on them. One ring was golden. He opened the book and she could see it was not printed, but its first pages were filled with scribbles and letters in dark blue ink.

“A diary”, she whispered.

He held it on his lap with both hands. They gazed at the wonder. She felt some kind of strange warm ray of light from around the book, as if it was radiating light and maybe also warmth.

“What do you think?”, he said sarcastically. “There are no pens anymore.”

“I still remember them”, she said. “If you write a diary, you will probably have a pen? Ink pens are worth a fortune now.”

“Yes, so I guess if I had one, I would not tell anyone,” he concluded.

Silence. They listened to the howling wind.

He must be important, she thought. Only the very wealthy had pens and diaries, or he might have stolen it. Then he was dangerous she thought, and she decided to be on her guard.

She asked “What’s your name?” 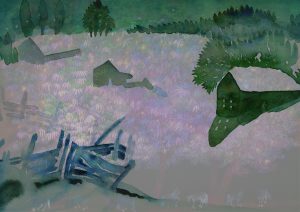 Having said that, they sat in silence. He was gazing into his diary. Whether he had a pen or not, she did not know. She took out a very small notebook from her suitcase. She was proud of the notebook, and she had kept it from her childhood, although it was nothing compared to his grandiose and exuberant diary. He glanced at the notebook and smiled: “Brilliant”.

She then remembered that the little piece of bread was in her suitcase.

She was ashamed of offering it to him and also thought she wanted it all herself. She said humbly: “Would you like a piece of bread, even if it’s stale?”

“I would, please”, he said. His eyes glistened. “I’d be delighted to have a wee piece of stale bread and in these desperate circumstances, no offer of anything edible can be declined or despised.”

She walked to the back of the station building and lifted her suitcase from the ground. It had become much heavier, she noticed. She dragged it over the grass. He looked up and noticed that it was heavy. So he helped her to carry it and placed it between them by the side of his own.

The two suitcases were similar, old fashioned in style. His was a little less worn. Hers had scratches. She divided the stale bread into two pieces. They both chewed the bread extremely slowly. The breadcrumbs kept falling into her lap, but they were soon all eaten. Without a drink the bread was so very dry.

Then they both looked up suddenly, and stared into each others’ eyes. In the distance there was a sound they recognized and the railway track was vibrating. The sound was well known to both of them. They both remembered it from long ago but they had not heard it for years. It was the rattling sound of a train approaching the station.